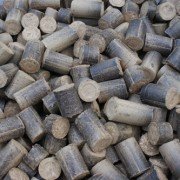 They burn hotter and cleaner, are cheaper to buy, and much easier to store and handle – so why do so few people with open fires and wood-burning stoves use recycled wood briquettes to heat their home?

Big in Europe, but still largely untried by many fire users in the UK – particularly in the south – those selling them claim that once you have tried briquettes, you’ll never go back to hauling piles of logs off your drive.

Briquettes deliver around 50% more heat for each pound spent than logs. They also have strong environmental credentials as they are made from waste wood produced as part of the furniture or other wood-related businesses – or in some cases collected from skips. Burning wood is generally considered a low-carbon alternative to fossil fuel because trees absorb carbon as they grow. The Environmental writer Chris Goodal has done the sums and heats his home using wood pellets – similar to briquettes – made from UK wood. The Drax coal power station burns pellets shipped from the US on the basis that the carbon savings are more than 80% once the life cycle of the trees are taken into account.

Briquette producers take sawdust and other shredded wood, apply 10,000psi (pounds per square inch) of pressure, and out pop briquettes. They are almost entirely natural – the lignin molecules in the wood melt under the pressure and bind the wood chip and dust together. They come in a variety of shapes from a number of providers, and in initial tests by Guardian Money they perform fantastically well in wood-burners. One briquette can last up to four hours, and big users will find they save around £150 a year compared to buying conventional logs.

Rowland Parke, director of the Dumfries-based Wood Fuel Co-operative says people in the UK are finally starting to wake up to the benefits of briquettes. “We are selling more and more of them, particularly in the past year or so. Once people try them they soon stop buying logs locally. They are cleaner and easier to store, and take up around half the space of a log pile. Until you have tried one you won’t believe how much heat they can deliver,” he says.

The moisture content of most briquettes is 10% or less, meaning they burn better and cause fewer chimney and flue problems. Logs sold in the UK generally have much higher levels of moisture – 20% in well-seasoned wood, and up to 50% in other cases, Parke says.

The co-op was set up by a group of like-minded people to gain bulk-buy discounts. It started selling briquettes in 2012, and they are now its biggest seller. Parke says some of the briquettes come from the Verdo plant 90 miles away in Grangemouth, but the majority arrive by ship from eastern Europe – particularly Latvia and Estonia.

Stuart Fitzgerald, managing director of online supplier White Horse Energy is another big fan. “Until recently you could draw a line across the UK: southerners all ordered nice-looking kiln-dried wood, while all our briquette orders came from the north. Now that’s changing, partly because of a growing awareness that briquettes can deliver more heat for the money.”

He says you have to keep them in a dry place as if they expand rapidly if they get wet. When they burn they leave around 1% of their original volume as ash, meaning you don’t have to empty the stove as often.

This site uses cookies. By continuing to browse the site, you are agreeing to our use of cookies.

We may request cookies to be set on your device. We use cookies to let us know when you visit our websites, how you interact with us, to enrich your user experience, and to customize your relationship with our website.

Click on the different category headings to find out more. You can also change some of your preferences. Note that blocking some types of cookies may impact your experience on our websites and the services we are able to offer.

These cookies are strictly necessary to provide you with services available through our website and to use some of its features.

Because these cookies are strictly necessary to deliver the website, refuseing them will have impact how our site functions. You always can block or delete cookies by changing your browser settings and force blocking all cookies on this website. But this will always prompt you to accept/refuse cookies when revisiting our site.

We fully respect if you want to refuse cookies but to avoid asking you again and again kindly allow us to store a cookie for that. You are free to opt out any time or opt in for other cookies to get a better experience. If you refuse cookies we will remove all set cookies in our domain.

We provide you with a list of stored cookies on your computer in our domain so you can check what we stored. Due to security reasons we are not able to show or modify cookies from other domains. You can check these in your browser security settings.

These cookies collect information that is used either in aggregate form to help us understand how our website is being used or how effective our marketing campaigns are, or to help us customize our website and application for you in order to enhance your experience.

If you do not want that we track your visist to our site you can disable tracking in your browser here:

We also use different external services like Google Webfonts, Google Maps, and external Video providers. Since these providers may collect personal data like your IP address we allow you to block them here. Please be aware that this might heavily reduce the functionality and appearance of our site. Changes will take effect once you reload the page.